The store will not work correctly in the case when cookies are disabled.
NOTE: Due to product and material shortages we are currently experiencing extended order processing and shipping times.

Re-loaded "Our 4x4s" from the old website: Cheap Truck

Re-loaded "Our 4x4s" from the old website: Cheap Truck

Below is the build thread on Cheap Truck from our old website!

One piece of advice we often throw out for anyone building a truck on a budget is to pick up someone else's truck or even just an abandoned project.  You can get a great deal on some good parts that way, or even pick up a complete running truck that just needs some tuning to get it dialed in.  Just to prove the point, we decided to put our money where our mouth is and now we have our "Cheap Truck".

We actually had a local guy come to the shop to tell us about this truck he was selling because he was moving, hadn't used it in years and just needed it gone.  It's a '74 long bed 3/4-T with a fresh GM 350 (335hp maybe?), SM465, NP205 and a 4.10 geared 14-bolt and external hub D44.  The guy had a ton of added goodies like a Detroit in the rear, 4" stiff lift, dual batteries with isolator, MSD ignition box with a Mallory distributor, electric fuel pump and a bunch of AN lines, suspension seats, fiberglass cowl induction hood, cool footprint gas pedal, Rancho 9K shocks, etc.

We picked the truck up on a Thursday afternoon for $1000, and spent some time Friday pulling the Go-Rhino axle trusses and the cowcatcher front bumper and then installed some of our ORD goodies:

We swapped out the old Mickey Thompson 35's for a set of old 2nd hand 37" Goodyear MT's and after an oil change in everything, it was ready to go, conveniently just in time for our Holy Cross City trip with Petersen's 4WOR.

On the trail we were really pleasantly surprised by how well it worked overall.  The gearing wasn't as bad as I expected and the truck was a decent climber, as long as you were going straight up.  The Carter carb could use some tuning (like turn it into a Q-jet or fuel injection) and loaded up really bad on any kind of side hill.

Luckily the premium ignition system would clean the motor out better than we expected also so as long as we kept moving through off camber parts, it would clean out and keep going.

Driving this truck is a whole different deal than my normal ride, Wally.  Normally; a trail like this is no challenge at all, just a pretty drive.  In the Cheap Truck I was thinking all day so that wasn't all bad.

All was fine on the trail till we got to the French Creek crossing with the really big rocks.  Even on the easy line, the combination of lack-of-gearing, greasy mud, aired up tires (on 16.5 wheels) and a carb that didn't like anything but level and gentle left the new truck on the winch line to get through.  But we had put another vehicle in front and beefy tow points on the bumper for just this occasion so it wasn't a big deal at all.  Everything was easy from the creek on up but we did just park the truck and walk up to Cleveland Rock to watch.  We barely got the fully built trucks up that one, much less one that's just started. 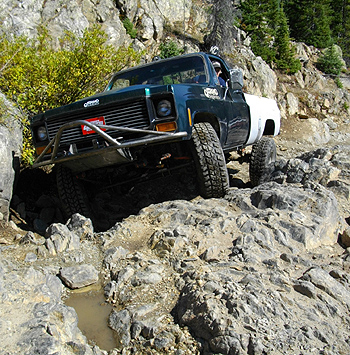 Coming down was just driving down, nothing very exciting.  We managed to drive the creek crossing unassisted since downhill is way easier and the only real issue was the stiff ride from the really old school springs.  Even in some decent seats we were pretty tired of being in the truck by the end of the day.

This type of truck is the deal to look for, it's pretty sound overall with most of the big parts done right and a few hundred in add-ons and it's ready to hit mild trails or even go to work hauling toys, firewood, whatever.  Yeah, it's got some issues but for the price they can be fixed!

Where is it going from here?  We don't have a solid plan yet, there's talk of using it for the next Ultimate Adventure trip, we've thought about selling it, basically we're not sure yet.  But no matter what we have a solid old truck to drive when our other rigs are overkill or we just need a truck.