The store will not work correctly in the case when cookies are disabled.
In stock orders take 3-5 days to ship and some items are still experiencing extended backorders

Our involvement with desert racing, Ultra4 racing, hardcore rock crawling, and trailride events plus camping and everyday street use of the fullsize GM platform has given us an great background to develop products ideal for a range of uses.  We love mixing this background and experience with solid engineering to help our customers build their truck to do whatever they want to do.  We want you to enjoy building and using your truck, it’s as easy as that!

Offroad Design was started by Stephen Watson in 1997 to bring fast developing offroad technology to the GM fullsize owner.  This was a time when people were looking to various sports and hobbies around the motorsports world and pulling pieces of their tech into recreational offroading.

The seeds of what would become ORD were planted on long camping trips in the mountains and deserts of Colorado and Utah and a frustration with how rough our ’82 K5 rode with its re-arched springs and 1-ton shocks.  With a mechanical engineering degree, a lot of practical truck use and some time in various parts of the motorsports world, we were able to start putting the better ideas together to make our trucks work better.  Little things like higher quality shocks and the first GM swaybar disconnects started making a difference in ride comfort and free axle movement.  Major gains quickly followed with bigger suspension mods like custom leaf springs, longer travel shocks and more durable shackle and bushing systems.  The drivetrain soon needed to keep up and beefier axles and stronger low geared transfer case systems like the ORD Doubler followed.

Some highlights along the way from then to now:

In 2000 we helped Aaron Clough with his Fourwheeler Magazine Top Truck Challenge effort and were bitten hard by the competition bug.  We drove home from California with a plan to take our K5 back.  We promptly tore the trusty ’82 K5 completely apart and rebuilt it around a port injected 468cid big block, coilover suspension and 42” tires.  We were voted in to TTC in 2001 and won several individual events including the mini Rubicon rock crawl.  Overall we placed second to a customer running one of our Doubler kits so in a way we won AND came in second!

2003 brought an opportunity to be part of a Baja 1000 effort and we actually rode several hundred miles of the race in a race finishing K5.  Stephen was a driver in the 2004 Baja 1000 and we’ve co-driven and helped crew many Baja (and stateside) efforts since.  Definite high points (besides actually driving in the race) were being crewmembers for Rob Mac and Mark Post’s overall B1K win in 2007 and Mac’s win with Jason Voss in 2016.

Also in 2003 we helped David Kennedy prep his 6.0L swapped ’83 K5 for the Petersen’s 4WOR magazine Ultimate Adventure and were bitten by that bug.  We joined the UA trip in ’05 and have only missed one event since then.

Ultimate Adventure drove multiple vehicle builds that have been ideal platforms to show what a well built truck can really do.  As a weeklong trail ride and road trip mix, Ultimate Adventure rewards a reliable functional rig that handles well on and off the road.  Right up our alley!

2007 brought our first production coilover kits applying all we had learned to give a fullsize truck tight steering and handling feel along with great ride and flex.

We threw our hat into the budding rock racing arena by earning a spot in the 2009 King of the Hammers race.  Over the last 10 years we’ve been on the crazy train of Ultra4 racing with our own car placing as high as second in the Vegas to Reno race and 12th at KOH.  The development of the race vehicles and the application of the new technology to the recreational offroad world has been truly amazing.  We (not only ORD and our customers but the offroad community as a whole) now have vehicles that can drive great on the highway, travel comfortably and reliably over rugged backroads AND rock crawl with the best. 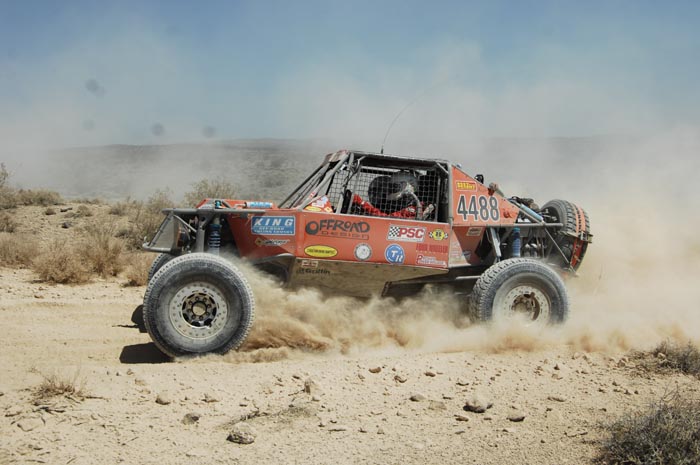 In 2012 we introduced our Magnum transfer case system bringing all we learned over the years with our 203/205 Doublers into one super strong and versatile transfer case package.

The last few years we’ve been part of the rise the restomod truck and we love it.  As the beloved squarebody truck ages, lots of guys find that they really don’t want to beat them up offroad and we fully agree.  There are some beautiful trucks out there that really don’t need to be rubbed on rocks and trees!  We often wish we had our K5 back as a nice full body Blazer.  The cool thing is we’ve been able to apply a lot of what seems like really “offroady” tech to the restomods.  Late model engine swaps and suspension systems that actually ride and drive nice are again a mix of various vehicle disciplines that we combine to make a “Sundae/Sunday” truck that’s truly enjoyable.

We should probably mention the Overlanding craze as part of our history just because it’s always been a big part of what we do.  The very reason we started developing better suspension and drivetrain systems for our trucks was to go on long camping trips.  Our ’88 Suburban was developed as a family hauler/camping truck and was a testbed for our early coilover systems, not by coincidence at the same time.  Our ’99 K2500 was an easy choice for a weeklong Baja trip a few months after its second Ultimate Adventure.  We often poke fun at how truck camping has become super popular with its new name but no matter what you call it, we still love it!

It’s been great being part of all the changes and advancements in the offroading world and we love taking what we’ve learned and applying it to our favorite GMs.  We’re looking forward to another couple decades of helping build better trucks!