The store will not work correctly in the case when cookies are disabled.
NOTE: Please be aware that certain parts are backordered and may take longer to ship.

"I got some new big tires, what gears should I put in my axle?"

"I got some new big tires, what gears should I put in my axle?"

Here’s a question we get all the time:  “What axle gears should I use for my combination?”

Obviously there are a lot of engine, transmission, tire size, vehicle weight and intended use combinations but here are some general guidelines and specific recommendations.

In general we like to gear a lifted truck to run more RPM rather than less.  Usually a lifted truck ends up with bigger tires, exterior accessories that add aerodynamic drag, the lift itself adding aerodynamic drag and often bigger axles, transfer cases and transmissions that make our power requirements greater.  Your typical lifted K5 Blazer can very easily end up with the equivalent load of a loaded down pickup so we tend to look at gearing systems for heavier rated factory trucks or towing packages for lighter rated factory trucks.  The big thing you see is that they’re geared deeper, no big secret.

The first thing to consider is if you need to gear for the road only or for offroad use also.  Typically with a dual transfer case system you have deep enough gears to do anything you want with the axles.  If the truck isn’t going to be driven offroad much or will be in milder terrain then you won’t need to think about what your axle gears will do either.  Let’s just consider road use for now so the next thing to think about is what roads you drive on.  There’s a big difference between wanting to run the interstates at 80 mph vs. backroads at 55-60 so start with an idea of where you want to go with it.

Overdrive transmissions let you run a lot deeper axle gear than you would think since the overdrive drops final drive RPMs so far.  Some combos we’ve had experience with here: 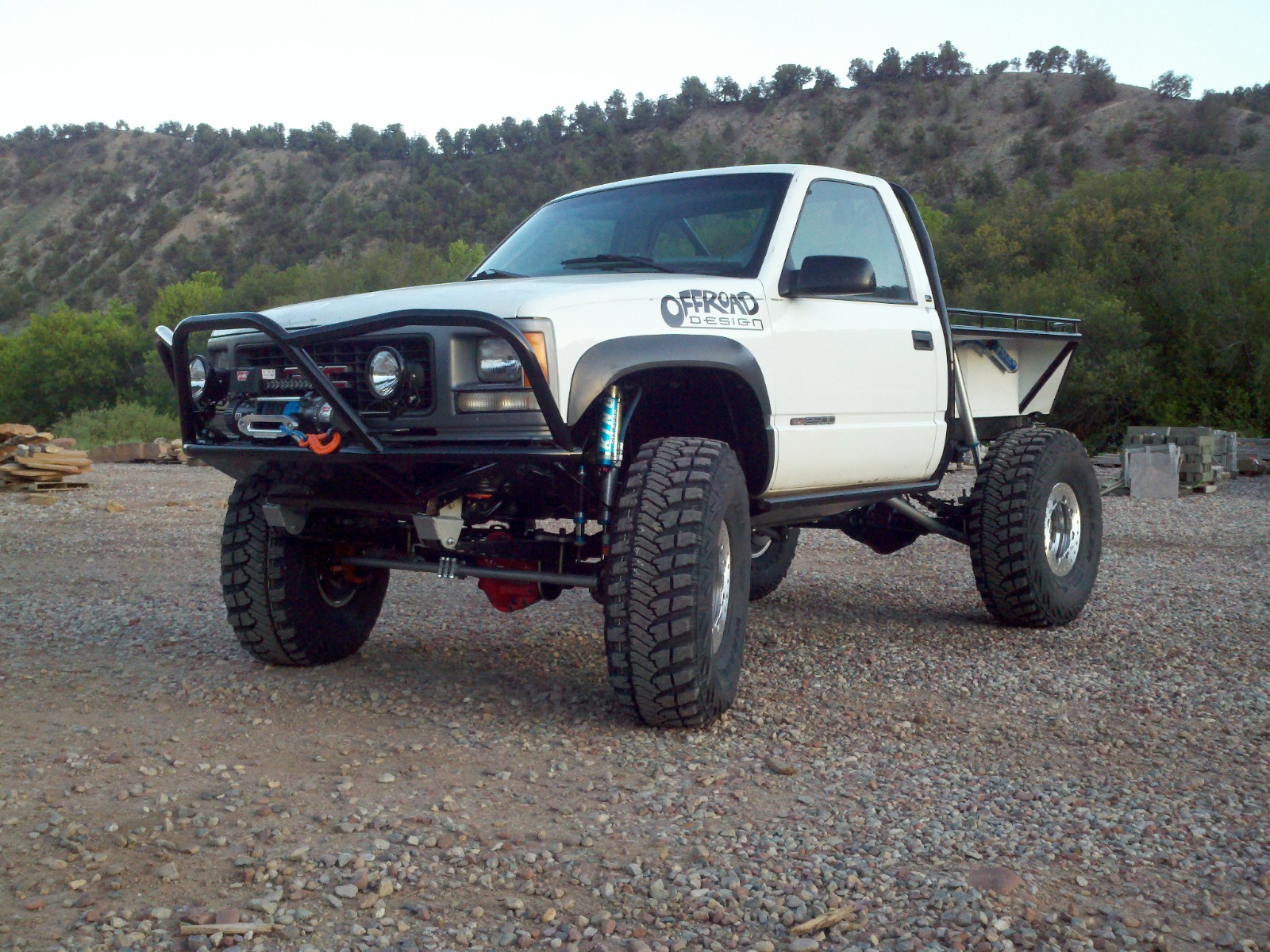 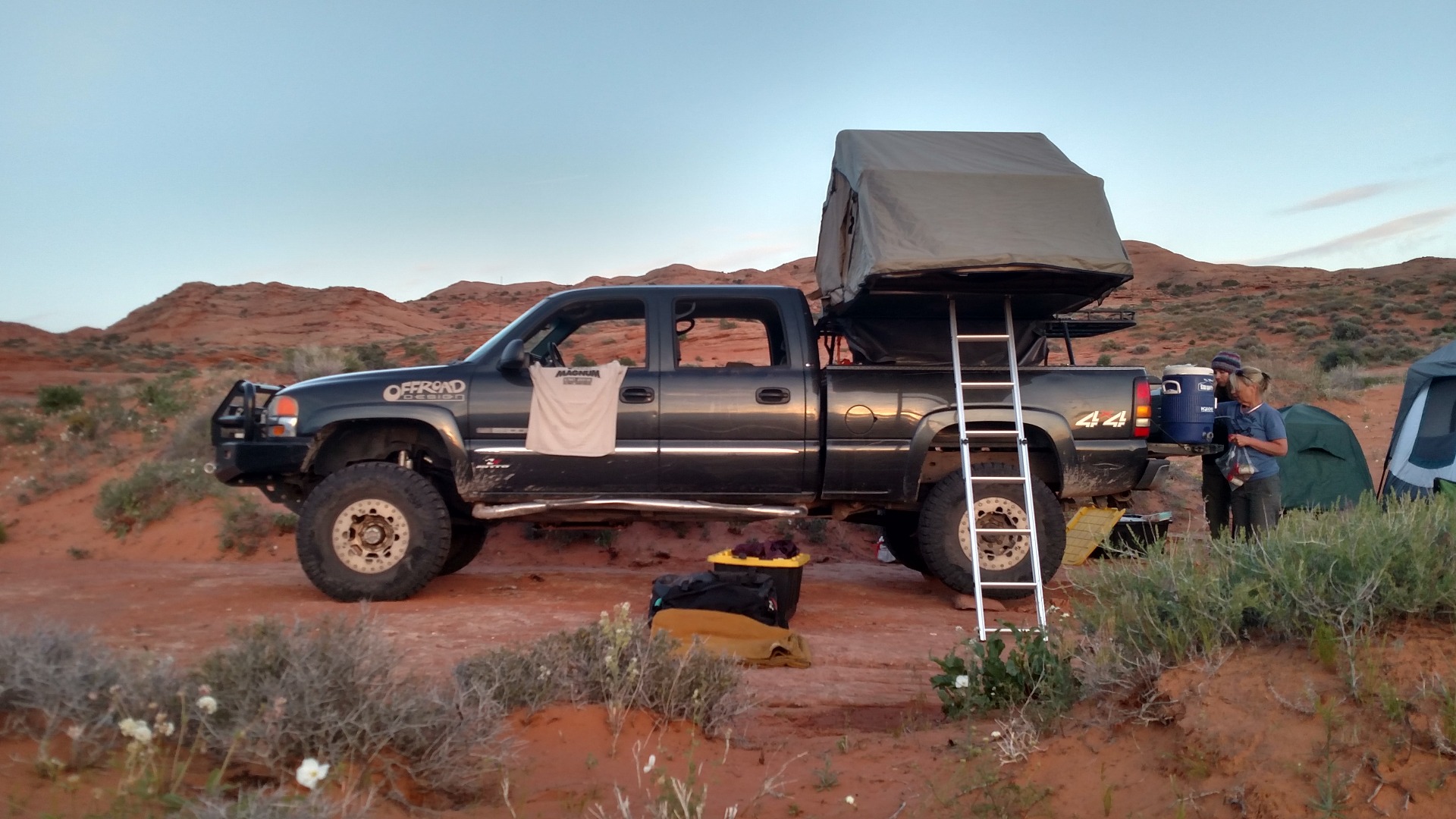 Our ’04 2500HD crewcab with the 6.0L and 4L80 also came with 4.10 gears and we installed 4.88’s to run with 37” tires and it has proven to work well all around.  Once again, it’s geared right around stock for a heavier rated truck and it works well around town and on the highway.

Our ’88 Suburban was originally a 1/2T and ended up with a set of 4.56 gear 1-tons with the stock throttle body 350 engine and 700R4 transmission all on 35” tires.  At that point I felt like it had enough engine RPM but was still short of power.  We could have geared it to 4.88 and helped it a little but really the answer was to add more power which is exactly what the new owner did with a fresh 383.

A much milder rig was a ’04 GMC Yukon with the 5.3L/4L60 combo and a factory trailer package that gave it 4.10 gears.  This is pretty deep for a 1/2T vehicle but easily let us run a 33-34” tire and still run down the road without gearing problems.  This truck never had a lift or any other added drag goodies besides the tires so the RPM reduction from the tires still worked well.

The common thread here is that the factory heavier rated trucks liked to run down the road at around 2400 rpm at 70 mph and when we geared the built up truck to match, they continued working well.

On older rigs without overdrive transmissions we have to play the game a little different.  We still gear the axles to run down the road but there are some compromises due to the lack of gearing spread. 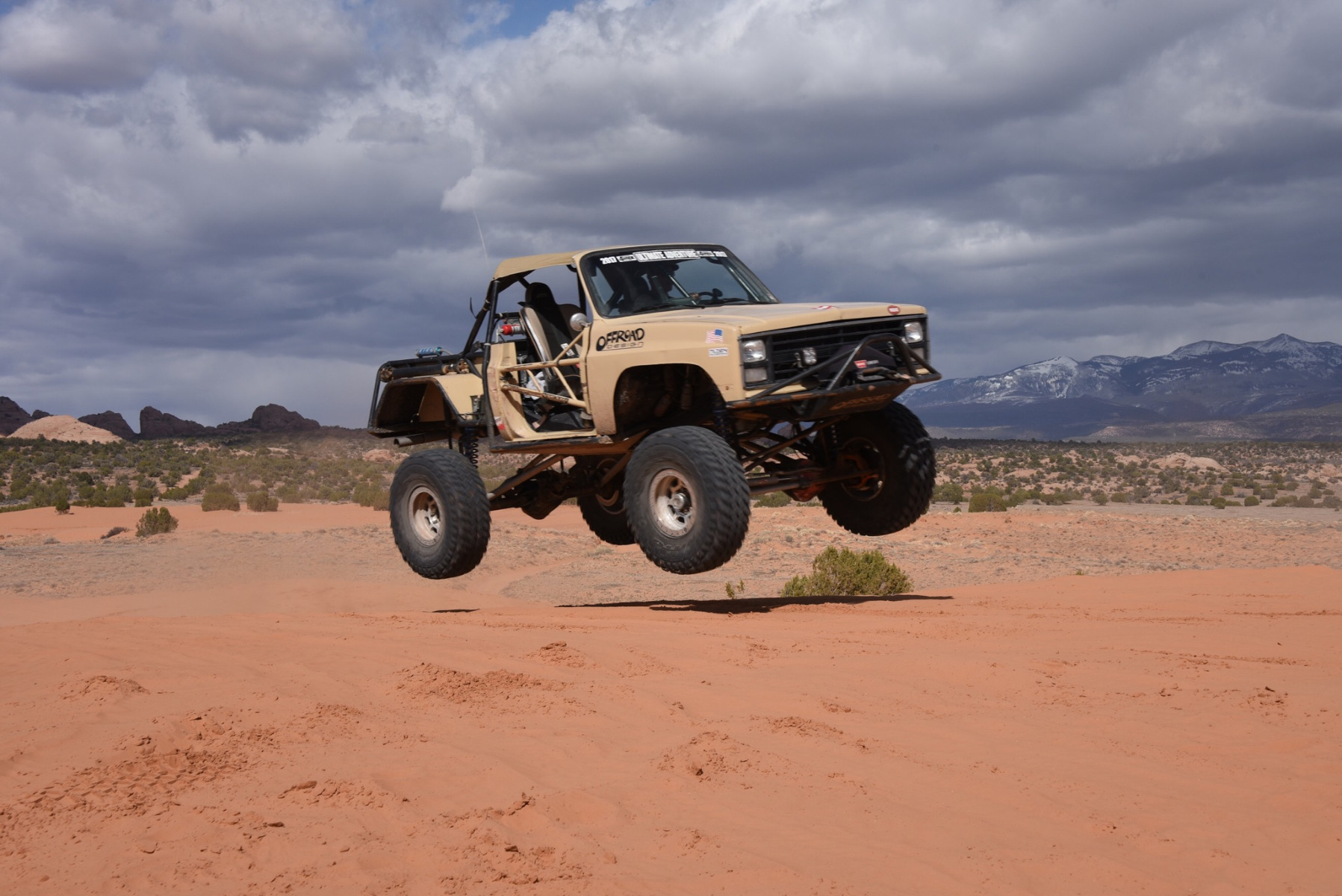 Our Convertible K30 has a cammed up 6.2L Gen4 engine with a TH400 and 40” tires.  We geared it 4.88 after a previous truck with a similar drivetrain running 4.56’s felt just a little doggy on some hills.  We had to gear this one for low and mid range driving on the road and just ignore the fact that it runs over 3000 rpm at freeway speeds since it doesn’t have an overdrive.

The “previous truck” mentioned above was an employee’s K5 frame with a truck cab buildup that ended with a 400 smallblock, TH400 and 38-40” tires.  He had 4.56 axle gears and decided to just run them to see how they did and it worked well.  Once again, you have a 3 speed transmission so you’re going to compromise somewhere but keeping the stock gears saved him a bunch of money and hassle.  Doing it over he might have gone to 4.88’s if he was running 40’s all the time because the bigger tires pulled it down a little but it was good enough.

One of our “Cheap Truck” projects was a ’85 crewcab with a 350, TH400 and 4.10 axle gears and it ended up on military surplus 37s.  This combo worked out OK to keep rpm’s reasonable at highway speeds and was still OK for takeoff and driving local roads.  And it was cheap since the truck came with the gears! 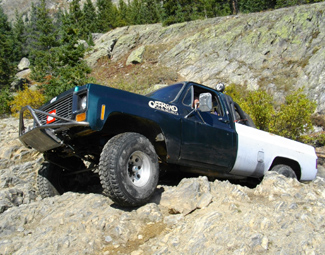 Similar story on our current “Cheap Truck”, a ’74 K20 with a 350/SM465 and 37s.  It came with 4.10s and they work OK for driving around, keep the rpms down on the highway and were cheap since they were there.  We do have to start in 1st gear sometimes on hills which isn’t super convenient but it’s still fine.

Several of us here have run 4.56 gears in our K5s or trucks with no overdrive and in general they’re OK but run a lot of rpm on the highway.  Takeoff power is good and the engine speed is nice to have on mountain passes but you’re running in what is considered a “kickdown gear” these days all the time so you just have to put up with it on the highway.

You’ll notice a little bit of a theme here with the no-overdrive trucks: we can often run what the truck came with.  Since we commonly use axles from heavier rated trucks, we’re automatically installing tow/haul gearing and it’s often in the ballpark of what we need.  That brings up an important point, if you can, run an existing gearing setup and see what it does.

Last note, this all depends somewhat on your engine’s torque curve and truck weight.  We’ve driven cammed up smallblock powered trucks that really needed extra deep gears and had to be driven like a car, meaning keeping RPMs up all the time.  The contrast to this is the Cummins 6BT that builds good torque at 1200rpm.  So in general on this subject: lighter trucks can use shallower (lower numbers) gears, heavier trucks need deeper gears.  Higher revving or lower power engines need deeper gears where high torque engines can work fine with shallower gears.